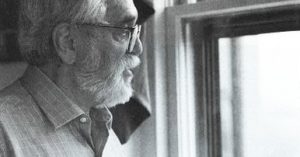 Following Salvador Minuchin’s death on October 30. 2017, there have been many richly deserved obituaries hailing his life’s work as extraordinarily influential in the mental health field and particularly in his pioneering of family therapy. In many of these tributes  family therapy is described as a modality of work with its special technical characteristics of interviewing the whole family, or structural family therapy as creating a crisis as a prerequisite for change. However, on the conceptual side, Sal Minuchin’s work is much more than a type of intervention or modality. It actually gave an entirely new field many of its foundational principles.

At the forefront of these principles is a relational view of individual identity and personal behavior. We cannot understand the individual without observing how it is influenced and influences the behavior of intimate others. In his sessions, Sal only appeared to be talking to one person. In fact, he always talked to all present with a talent for illustrating complementarities (“On whose shoulders has this child become a giant?”, “You are a widow, your husband does not pay attention to you”).  The concept of boundaries divided in proximity and hierarchies was perhaps one of the first attempts to come up with problematic interactional patterns or relational assessments.

The second closely tied principle is an ecosystemic view. Minuchin not only took the individual frontiers of psychiatry outwards to the family but he went further to point the stressful social environment of poor families, particularly Black and Latinx. Sal was in many ways the first one to introduce socioeconomic and racial inequality to our thinking. He vigorously challenged the professional prejudice that poor families were unreachable and untreatable and further understood that the true experts for this work were community paraprofessionals. He wrote a great deal about his personal struggles with power differentials in society that affected him as a Jew and an immigrant and how this informed his wish to fight back for fairness. Late in life he said “all the people who suffer injustice are my brothers”.  Although he did not empower clients directly to battle with oppressive systems, Sal, together with his wife, psychologist Patricia Minuchin, attempted to revolutionize policy and to reform institutions by working with those at the interface with larger systems such as the courts, welfare, foster care. And in his co-authored book on “institutionalizing madness”, he offered a sharp and constructive critique of mental health institutions and its entrenched ideologies.

The third foundational principle in Sal’s legacy relates to the training of therapists. He was a master of “in vivo” modeling consultations and one-way mirror observations. In his last book, The Craft of Family Therapy, he joins his voice to that of young therapists in training to assert the importance of learning inductively by doing repeatedly and creatively rather than deducting how to work from various schools of thought.  Once he compared the training of family therapist to that of a Samurai. You study with extreme discipline all of your moves for seven years and after having mastered them in your bones, you throw techniques away to make room for your own personal style to come in.

Sal believed therapists must remain flexible, constantly growing and energized by the new ideas that propel our field forward. Along with his staunch protectiveness of systemic thinking, he scrutinized new ideas with critical respect and admiration, valuing some like narrative approaches while rejecting others.  Significantly, in a 2007 book, Minuchin enlarges his lens from the two- generation current family system, to explore the influence of the past and the families of origin in the present interactions, a novel development in structural family therapy.

Life could take Sal out of Argentina, but it could not really take Argentina out of Sal. Yes, he inherited from his country the inattention to gender inequality and the reliance on the traditional idea of a social contract that includes authoritative therapeutic expertise, even if he mellowed on both counts later on.

He also inherited a love and knowledge of Spanish literature, and so the wisdom of a professional life laced with the beauty of poetry, music or theatre lives on in his writings, and in his colorful images, the metaphors and analogies that evoke the lyrics of tangos (he knew many). Tangos speak of ties that connect, ties that bind, ties that fail, ties that help people change each other. We will always be thankful to him for what he gave to families around the world and to us with his unique mixture of challenge and support.