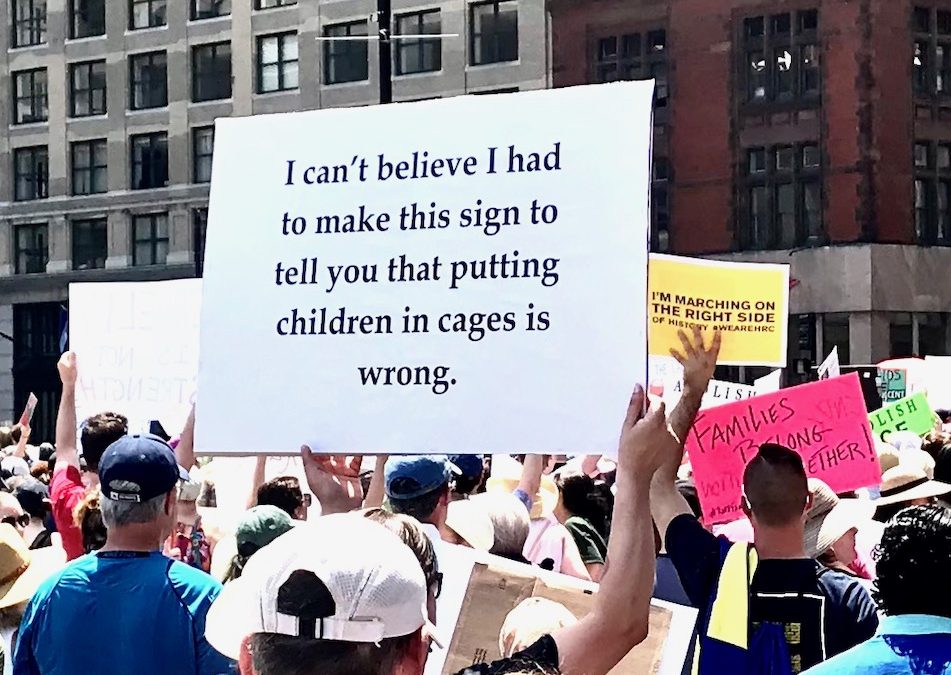 “Give me your tired, your poor, your huddled masses yearning to breathe free.”

This inscription on the Statue of Liberty has been a beacon to the world. Lately, it has become conditional, with an addendum like, “Offer may vary” or “Huddled masses from Norway preferred.”

Fifty-three percent of Republicans support the President’s “zero tolerance” policy on families of color at the southern border—even though this policy violates international law and places children at severe psychological risk. When supporters of the policy state migrants "shouldn't have broken the law in the first place", they ignore the fact that seeking asylum is not actually breaking a law. Asylum seekers are allowed to do just that. And crossing the border without documents for purposes other than asylum has historically been a misdemeanor.

Why are many of these folks seeking asylum? Because they come from countries where the murder rate is the highest in the world, and many children are being murdered as well. For example, homicide rates in Honduras, El Salvador, and Guatemala are ranked first, fourth and fifth in the world, and more than a quarter of homicide victims are under the age of 20 (United Nations Office on Drugs and Crime, 2013). “Most youth face extreme hardship in their countries of origin and these hardships seem to continue in the post-migration context. Youth run to the U.S. only to stand still – often facing immigration limbo [and] deportation” (Jodi Cardoso, in press). Many persons presenting themselves at our borders migrate to survive. Many are legitimate asylum seekers.

At least 2342 children (NPR, June 19, 2018) were already separated from their parents before the zero-tolerance policy went into effect. Their parents do not know where they are. The children do not know where their parents are. Children have been photographed in cages, huddled under Mylar blankets in cold rooms. The same company responsible for detaining these young people is profiting handsomely off their misery. It is no coincidence that they contributed $170,000 to the current President’s campaign (Bloomberg, June 28, 2018).

Have you ever lost track of a child in your care for 15 seconds at the mall, or at a public pool? Imagine the acute anxiety you experienced in those moments multiplied and extended into chronic stress lasting for days, weeks, months. As a licensed therapist and a published researcher specializing in the area of trauma, I can tell you this: studies clearly demonstrate the traumatic impact of forced separation of children from their parents (USA Today, June 28, 2018). The emotional trauma caused by this policy damages children’s brains. Severe psychological stress causes damage much like what one would see from blunt force trauma. Severe anxiety, depression, and Post Traumatic Stress Disorder are common when children are separated from their families. The capacity for a healthy, secure emotional attachment is disrupted in these children.

This US policy allows the kidnapping and traumatization of children as young as 9 months. It has led to children being caged like animals. It has cruelly let parents, feeling for a fleeting moment that they have finally reached a safe haven, experience their children being torn away from them to be terrorized and criminalized. This is beyond shameful. It is abusive, inhumane, unconscionable. Rather than putting “America First”, these actions place us dead last on the world stage.

Proponents of the zero-tolerance policy, trolling discussion boards across the internet, say that the political opposition want “open borders” and want violent crime to rise unchecked in our country. Such arguments are mendacious and embarrassingly unsophisticated. A cursory examination of history reveals ugly precedents (CNN, June 2018) for the zero-tolerance policy. Examples include internment camps for the Japanese in the 1940s, and residential schools for Native Americans where their families, language, and culture were systematically eradicated. The US government has been cruel, explicitly racist, and genocidal before, and it is happening again now.

I want to believe that this is not who we are. I really want to believe that we can do better than this. Through an insistence on compassion and decency, and a respect for international law, our values can come back into line with our policies.  Protest, political organization, voter registration, and actual voting will be required.

AFTA's message on what you can do: